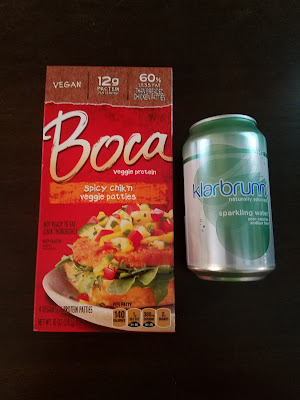 I tried being a pescetarian earlier this year, so I needed to find foods to take the place of beef, chicken, and pork. During that time I tried plant-based chicken patties and beef patties. I am not a pescetarian anymore, and am eating regular beef again. I'm still trying to cut back on chicken and pork because I think chickens and hogs live crappy lives before they're slaughtered for food.

I've been eating these chicken patties now for a few months and I like them. I can pop them in the microwave, so they're easy to make, and they taste good. The same brand has hamburgers as well, although those don't taste quite as good. These chicken patties cost me about $3.99/box, which has 4 patties in it, so $1.00/patty.

This coming week I'm going to try drinking less pop and try drinking carbonated water instead. Like I mentioned in a video blog, I don't have many vices - I don't drink alcohol or smoke, and I'd classify drinking pop as enjoyable. I'm hoping that drinking something that is cold, carbonated, and has some flavor, will help me drink less pop.

When picking up vegetarian or vegan processed foods, I am worried about the sodium content. The nutrition facts for these patties are - 1 Patty has 4.5 g of fat, 380 mg of sodium, 13g of carbs, 12 g of protein. The sodium content isn't the greatest, but it's still going to be the same or better if you ate a breaded chicken patty from anywhere else.