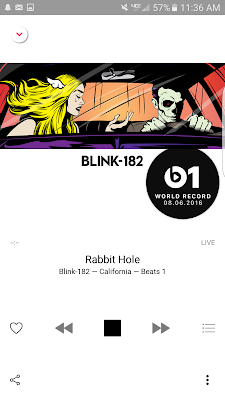 Blink-182 has recorded a new album and it will be released on July 1st, 2016. They released their second full length song today on Beats 1 radio. Apple makes things "exclusive" and it makes you want their items and to be a part of their group. By having this world premiere on Apple Music and the Beats 1 Radio, those who don't have iTunes or the Apple Music app couldn't listen to it live. Not to mention setting up a payment plan (even if you immediately cancel) to listen to Apple Music.

Now we're in the great age of technology. Within a couple of hours, the song was available from the official blink-182 YouTube channel. There were also streams posted shortly after the song was released (which were taken down due to copyright laws).

The point I'm trying to make is that it frustrates me that Apple still gets to be the "exclusive cool kid". From a business standpoint, it's great! From a user standpoint, it's not so great. I've experienced this when wanting to watch Apple presentations live, and this has to be done on the Safari Browser, or through some "i" device.

I did not like the Beats 1 radio. Having a live DJ was cool, and after that it stopped being cool. I did not enjoy the music, and neither did many of the blink-182 fans who were also listening in just to hear the new blink song (source - blink 182 subreddit, haha).

I won't be using Beats 1 radio again. I'll wait the hour to hear the song on YouTube, Google Music, or some other source.