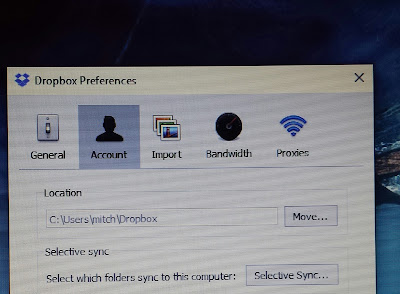 Something I just learned about that Dropbox has is "Selective Sync." This feature is as awesome as the band N*SYNC! (No sarcasm).

You can select which folders in your Dropbox folder will sync on the computer you're using. I found this out when installing Dropbox on my new laptop last night. I didn't want the camera uploads folder (with years and years of photos/video) to sync to brand new computer and slow it down. I went to the good 'ol Google search and starting asking questions. I was eventually led to the Dropbox website and it talked about selective sync.

When I got Dropbox installed and logged in to everything, I quickly went to the preferences to select which folders I wanted sync'd. Now one thing to note, it'll sync the folders you select and it will still sync all of the loose files in your main Dropbox folder. My lack of digital minimalism led me to having my Dropbox on my new computer filled with a bunch of loose files.

I didn't know about this feature, and I thought it'd be cool to share. This saved me and my computer hours (maybe days) of unnecessary file syncing. This saves network bandwith and saves resources on your computer.