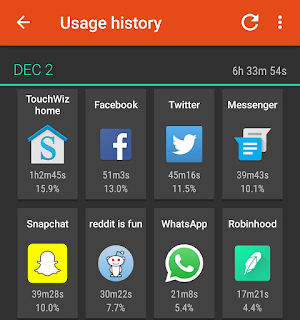 Happy December! (I forgot to say this yesterday)

This is a screenshot from my app usage today on December 2nd. I do not like these numbers, as this is too much time on my phone. After some reflection though, I don't have an Xbox or PS4, I don't play computer games anymore, I don't spend much time on my iMac, and I'm really only on my Chromebook in the evenings. The time not doing the previously mentioned items is probably displaced to being on my phone.

Facebook messenger used to be higher on usage, but I've stopped using it as much. I'm finding traditional texting to be more effective than Facebook Messenger. I'm also using Snapchat more in ways I would text, so that's why I'm using increased usage on Snapchat.

I'm not 100% what the "TouchWiz home" app is. I think it's just the phone being open on the home screen, or swiping in between home screens. I think I will have to set some limits for myself. Facebook for example, I should limit to 10 minutes a day on my phone. In general, I'm finding Facebook to be too full of ads, shared pictures, minion pictures, and quizzes tests. I miss "original content" on Facebook. Ten minutes should suffice to get the general updates from the day.

If you think these numbers are high, you can download the app and see how your usage compares. Yours might be higher than what you expected.