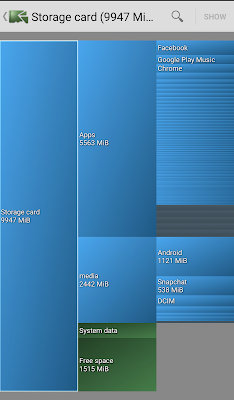 Back in June I bought a 64 gigabyte SD card for my phone. I have a Galaxy S4, and this model still allows for removable storage. Apple's iPhones do not have removable storage and the Samsung Galaxy models have started doing the same as Apple. I bought a SD card for my phone because I was running out of space with my small "16" gigabyte hard drive. I put the 16 in quotes because as you can see on the picture to my left, I actually only have 9.947 gigabytes of storage for my own personal usage, and even less if you count bloatware apps (Looking at you Verizon and Samsung).

The past couple of days my phone notified me I was running out of space. I wanted to see what is taking up space on my phone and in what quantities. I downloaded an app called DiskUsage. Now anything that can scan your phone like this, I would be cautious with installing. This app had over 1,000,000 downloads on the google play store, so I figured it was OK. You can see I have 5.56 gigabytes of apps and 2.4 gigabytes of media (pictures/video). I actually don't have a ton of apps left to remove on my phone, so I'm not going to clear much space there. I think I can make a decent amount of space with deleting pictures. I can delete the pictures saved on my phone once I make sure they're backed up on the cloud.

I like the DiskUsage app so far. It can scan my internal storage and my SD card storage. You can see that Facebook is my largest app, which I talked about deleting in yesterday's post. (Small update - my phone says I can move the Facebook app to my SD card, so I am going to do that for now. I'm still undecided about deleting the app). I don't know if I'll keep this app forever, or if I'll uninstall it once I get my phone storage under control.