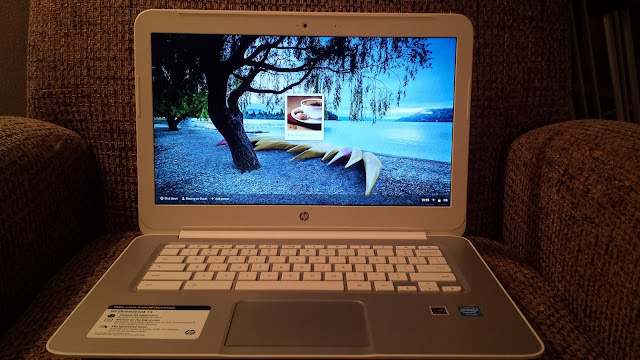 I've had my Chromebook for about a year now, and it's easily one of the best technology purchases I've made. I was initially drawn to the Chromebook for a number of reasons -


When I read that list now, I am still very happy with my Chromebook for those reasons. At this point last year, I had my desktop computer and laptop computer. I got my laptop computer the summer of 2008, so six years later, it's running pretty slow. I would start up my laptop, and then go and do something else because I knew how long it would take to start up. My Chromebook starts up very fast, and I don't think start up time has slowed down since I've gotten it. I have noticed recently that the battery is starting to wear down faster than what I remember. I've tried to practice good battery life techniques by not leaving it plugged in all night to charge. I think regardless of how well you treat technology, it's eventually going to wear down.

The Chromebook keeps itself updated. There is no complicated process to install updates or having out of date programs/software. All I get is a notification to restart my Chromebook to have the most up to date version, and after a restart, everything is good to go.

There are tons of tablets on the market. I didn't want a tablet, nor a tablet with an attachable keyboard. I still wanted a full keyboard. I opted to get a larger screened Chromebook, just so it looked and felt more like a traditional laptop. I love being able to type on a normal sized keyboard.

I will continue to use my Chromebook for a long time. I do not foresee buying a new one for awhile, unless a major update were to come out.